What’s a man to do when he can no longer sustain civility? Paul Crispin has given it a good run but faces nothing but brick walls in matters of love, family and friendships. For Paul, all avenues lead to a cliff that he will eventually have to run over. The victim of a shooting at a local bar, Paul will die a violent death too many times to count. At first, he does not understand it, but he’s going to do something dreadful and will pay dearly until he can figure out the error of his ways. It figures that on game seven night, Paul must deal with purgatory.

"Reading 'Game Seven' is taking a no holds barred walk through the fractured mind of the depressed writer Paul Crispin. With solid writing throughout even the rambling narrative of Crispin's psyche seems to push the story to new heights. The scary thing? We've all had some of these thoughts ourselves."

The makings of a book cover 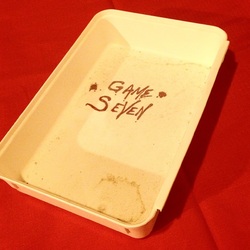 The "Game Seven" cover was designed right around the time the book was written - during the turn of the century (wow, that still feels weird to write). Taking a small tray and using clothing paint to write the words, the tray was then filled with a small amount of water and placed in the freezer. Once frozen, a simple bend of the plastic created some awesome cracks to make it look like the ice on a hockey rink. The tray is still alive all of these years later, although it's a bit dusty.

a story that hits close to home ... but not really

Writing a book about a guy experiencing a gory death along with his coworkers is a tricky topic if you plan on keeping friends, especially when the guy in the book works in the same field and essentially the same office environment you work in. When I initially wrote "Game Seven," it became a secret that I would only share with coworkers that I trusted and knew would understand. I'm sure many authors experience that moment where they have to explain to someone that the story isn't about them and that it's all made up. Still, you'll run into people who don't understand that and want to keep as far away from you as possible.

I still regret the phone conversation I had with my dad a couple of years before he passed. I sent him an early manuscript of "Game Seven" and he called me as soon as he finished it. The conversation was awkward and very uncomfortable (probably for both of us). He wanted to know if the cruel and alcoholic father in the story was him. I told him no but I could hear in his voice that he was crushed.

In a story like this, it's sometimes hard to convince people that, while parallels to real-life may exist, fiction is just that - fiction.

By the time the book was published and it became public knowledge that this was a tale of a newspaper reporter gone berserk written by a newspaper reporter who, as far as I know, hadn't, it was a little tricky to maneuver. The few interviews I did surrounding the release were inevitably met with questions along the lines of "Is Paul essentially you?" "Have you ever gone through this in your job?" or "Did you write about any of your coworkers in the story?" The fact is, Paul is made up and, it's only natural to write your first book based on your knowledge at the time. Of course my main character was a reporter like me. You'll often hear agents or publishers ask you "What makes you an expert in this field?" when you are discussing your book and, I guess, I felt like I was as close to an expert as my job as I could be at the time. I'm still not quite an expert at mass murder but, hey, fiction.

The story began one night when I had a bizarre dream. I had just moved back to Colorado at the time and was working at a newspaper in Fort Collins. The dream came out of nowhere. As is the case with most dreams, there was no rhyme or reason to it. In the dream, I was sitting at a bar, minding my own business when a shadowy figure came in and shot me in the back of the head. It seemed so real that I swear I got a real headache instantly. Then, just as quickly, I woke at the bar again and was shot just the same. It went on again and again. Each time I was shot, I noticed a revolver on the counter getting closer and closer to my reach. Before I could see how it ended, I woke up with a racing heart and no idea what I had just gone through. That led to the idea that I would put together a book using that premise as a foundation. What started out as a basic idea quickly ballooned into something so much more. Revealing that dream at the time would've surely freaked out any coworkers that knew about the story at the time..

Don't worry past coworkers - I'm not the homicidal type. I'm as nonviolent as it gets.

I would get off work at 2 in the morning each night and arrive at a quiet house and write a little here and a little there. Oddly enough, I got into a zone where any time I reached a critical writer's block, I would get out of it by dreaming about a plot twist. Just like Jerry Seinfeld wrote down a joke he'd remembered in the middle of the night in one of his TV episodes, I would reach over and grab a notebook and scratch down my dream before the dark clock in my head erased it.

I also got quite a bit of help from an unexpected source. During that time, I was writing a movie review column that printed in various cities around the country, including Fort Collins. I received an e-mail from a gal who said she was the aunt of director Troy Duffy and wanted to thank me for writing a glowing review about his movie, "Boondock Saints." Over a series of crazy events, I was soon getting advice on my story from Troy. He encouraged me to make it larger and one day over coffee, gave me a few tips on how to structure a story. It was advice that I still use today and I'm forever grateful for it.  -Patrick
Powered by