One of the most heinous crimes ever gone unpunished in Colorado’s history has remained a mystery for nearly 20 years. Only those who committed the rape and murder on that fateful evening in 1983 carry its burden.

It’s been 18 years since it happened and while some of the criminals have gone on to enormous success, there are those who live petty lives, shrouded in grief and guilt. Someone knows about their crimes and when the men become the target of a serial killer, it’s up to one cantankerous detective to redeem the victims and reveal their secrets.

the mystery of a book cover 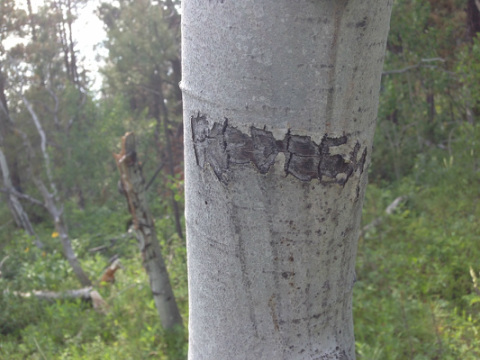 Somewhere in central Montana is a grove of aspen trees with a mysterious message etched on one. The word "redeem" today looks nothing like it does on this cover as the bark of the tree has done what aspens do after years of healing from such an injury. It's a black blob that is still legible and probably just as enigmatic should a wayward hiker happen to stumble upon it. I wonder if I should hold a contest someday for anyone who can find it. - Patrick

When the story for "Redeem" began to take shape, I was still knee deep in trying to figure out what to do with "Game Seven" and frankly, my life. I knew that I loved the process of writing fiction books but I also knew that I hated the process of trying to find publishers and/or agents to pay attention. I also had experienced promises broken and promising leads shattered in getting a book from the computer to the public.

One thing I had to come to grips with during this time was - what kind of writer do you want to be? With "Game Seven" I decided to be as raw and aggressive as I wanted to. I couldn't be concerned with a subject matter to the point where the thoughts of, "What if my mother and grandmother read this?" clouded my judgement. With "Redeem" things were even more harsh in nature. The despicable act of rape was introduced as was a brutal serial killer. I think I was inspired by the movie "Se7en" at the time and the way the killer in that story was not just a wicked human being but someone with a super intelligence that made his killings well thought out and constructed in almost an artistic way.

"Redeem" also ended up being the first book I wanted to construct in two parts, almost to the point of those parts being unrelated. I wanted to pull the reader in with one story and then pull the rug out and start a new one. Maybe I'm an asshole that way much like Russell the detective is in the story. This was also the first book that I decided to incorporate "Game Seven" into as a book on someone's shelf. It's a bit self-serving, I know, but so is building a web site with your name as the URL. See if you can find "Game Seven" in all but one of my subsequent stories. - Patrick
Powered by